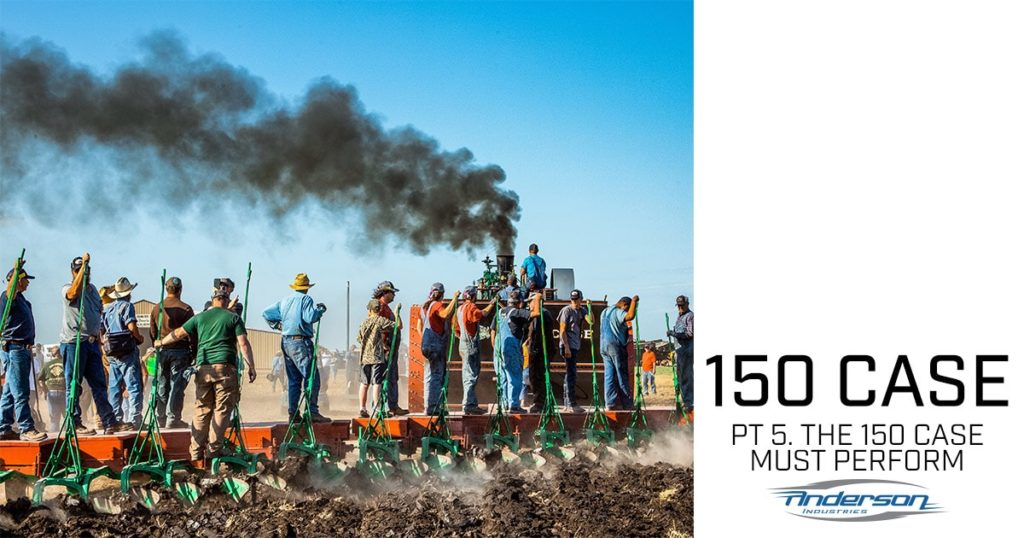 After previous issues with the intermediate gear seizing onto the steel hub and a failed plowing attempt with the 12 bottom plow only 3 days remained until show time, I knew we were out of time to find a solution in the field that would allow us to pull 24 bottoms. I had my mind set that the 150 Case had to perform and failure was not an option.

I called friend Mark Davidson who hauled the 150 Case from Sheridan home to Andover.  I said, “Mark I’ve got trouble” he said he’d be there in 25 minutes. We loaded the 150 onto the lowboy and hauled it into Webster to the shop of RDO Equipment.

We got to Webster and pulled the engine into the shop by 4:30 pm. Mark said he’d help me that night tear it apart. Some of the mechanics gathered around many seeing a steam engine for the first time. I explained how I had a problem with the intermediate gear and there was no chance to pull 24 bottoms in less than 3 days the way it is.  Jeff Kwasniewski asked if I was going to try to get the gear off tonight, I told him “Hell yeah, I have to machine it tomorrow and get it back together. It has to perform on Friday!”

Jeff said, “let me punch out I’ll help you!”  Within a few minutes, there were a half a dozen new faces, guys I had never met who just finished an 8 hour day in the shop standing there by the engine ready to go to work!

By 9:00 pm that night, we had the entire right side tore down, it took us nearly 2 hours to get the intermediate gear off the stub.

The issue was the ductile iron gear had too similar frictional wear properties to the 1045 steel shaft of the hub it ran on.  So the ductile grabbed the steel of the shaft and was galling and pulling chunks up as well as cutting ridges which made it almost impossible to get the gear off. I told my new mechanic friends there was an internal snap ring in that gear, which was almost the case with the galled rings that were cut in the shaft that prevented the gear from coming off.

Had we not gotten the gear to come off the stub, I knew the only option would have been to cut the large link that was holding the bracket and gear to the upper cannon bearing - something I wanted to avoid at all costs.  Fortunately we got a transmission puller and enough port-a-power, sled hammers, and a combination of turning, pulling, and swearing to get the gear off.

The next morning I called my friends Chad and Paul at P4 machining in Clark, SD. I asked them what they had in the large vertical lathe.  They had a job running and asked what I was wondering for.  I told them I have problems with the 150 and need a big lathe to turn the bracket down so I can bore and sleeve the gear.  Chad said bring it down we’ll tear this job down and start on it right away.

In the meantime Pat, the plant manager for our manufacturing plant in Webster, set the gear up in the Haas mill to be bored while I ran to Clark with the stub. When I got back I started boring the gear and machining the aluminum bronze bushing to press in the gear.

By 4:30 that day, Wednesday,  September 5th (48 hours until plowing with 24 bottoms), I had the gear and bushing machined, ran over to Mereen Johnson and pressed the bronze bushing into the gear. Bob Clark went to P4 and picked up the finish machined stub shaft.

I returned to RDO just in time to meet Colin and Jack Beamish at the approach who were on the way down from Manitoba for the show.  I told Colin I might need some help so they came directly to Webster.

The new 150 Case pit crew team was just finishing up another day in the shop as I pulled in.  I asked if they were ready to put it back together, and they said we can’t take something apart and see it go back together!

Starting just after 5:00 pm we had the stub, intermediate gear, differential, clutch, flywheel, gear shields, wheel and lock nut back on by 6:30.  Then we proceeded to install the extensions for the very first time. Everything fit well and we had the engine finished with extensions on by 8:00 pm.

We fired up at RDO in Webster, made a few test runs around the parking lot. The first time I had ever been on a tractor and looked down at the cab of a combine! Test runs went well.  We loaded shortly after 1:00 pm and headed back to Andover for a successful test run with the 12 bottom plow! Test run with the 12 bottom went good, and being out of time, we will just have to wait and see what tomorrow brings…

After the public debut, as we were backing the engine up to the 24 bottom plow there was a loud clunk and clanging that came from the differential. It has spread apart due to the 1” key holding the left hand pinion from coming loose.  The loose key allowed the differential to spread itself apart by pulling the countershaft through the cannon bearing.  A simple fix, just bad timing!  So after an hour with the loader and skid steer pushing the countershaft back through, and then driving the key back in place we were ready to go.  I hollered out to the crowd “are you ready yet” to which everyone roared “YES” and off we went.

The rest I guess is history...

The irony of the story is we had to have the Big Case in the John Deere shop to get it tuned up! I probably won’t hear the end of that!

The moral of the story is no matter what adversity or challenges present themselves you can never quit!

I am forever grateful for the team of RDO mechanics and all of the incredible friends who volunteered late nights and countless hours to make the 150 Case ready for a successful debut!

Thank you to all who helped make this dream come to life and for those who made the trip to be a part of this historic event!

Stay tuned for Part 6: Dream to Steam and the people that made it happen. 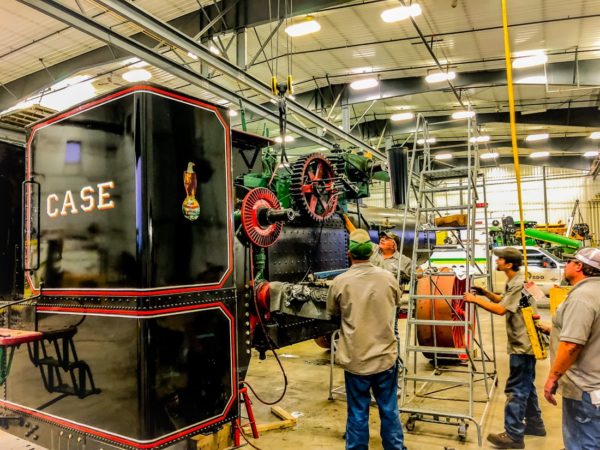 Pulling the intermediate gear off the stub shaft 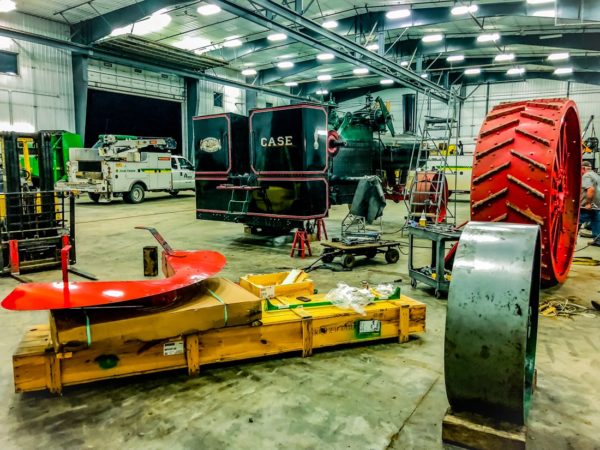 150 disassembled 3 days prior to debut 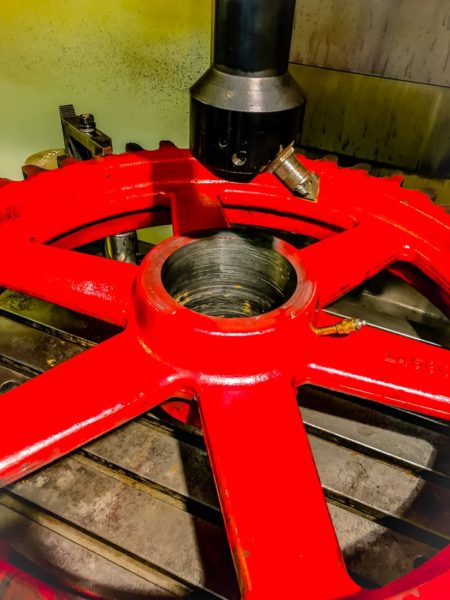 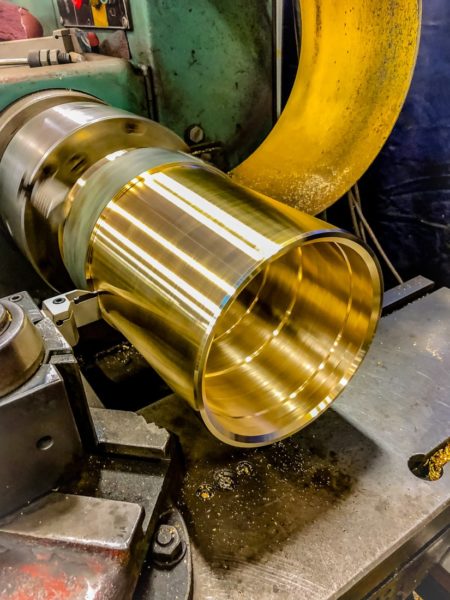 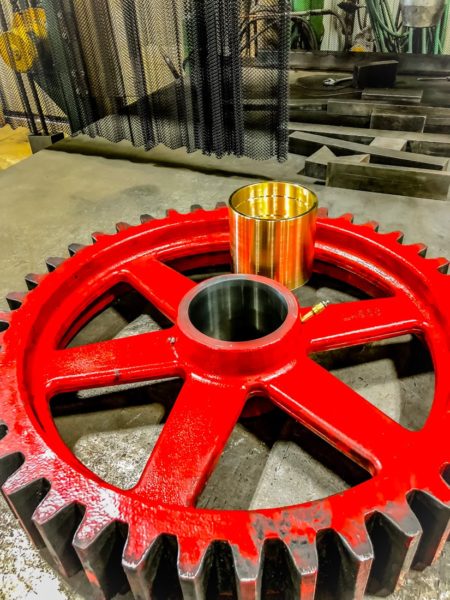 Gear bored and bushing made 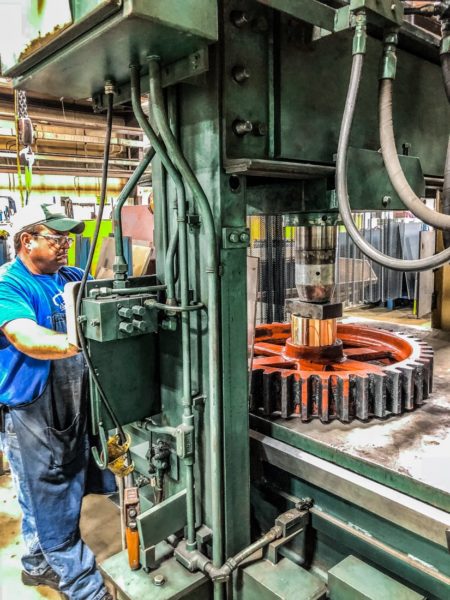 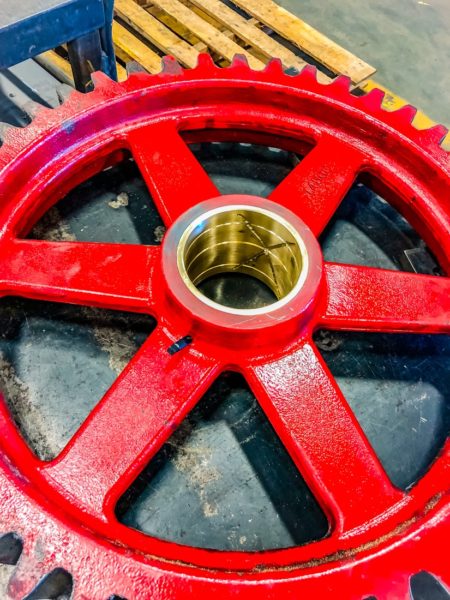 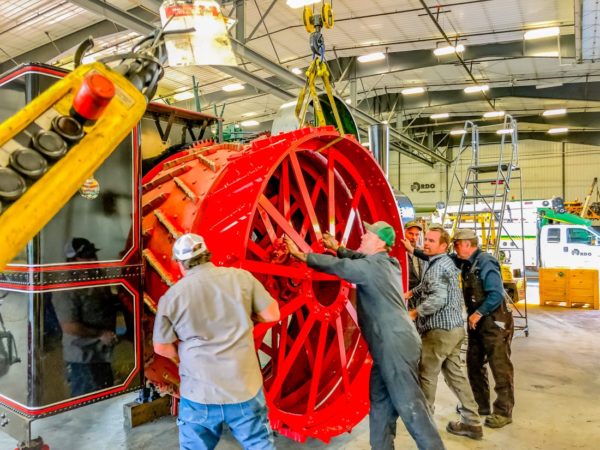 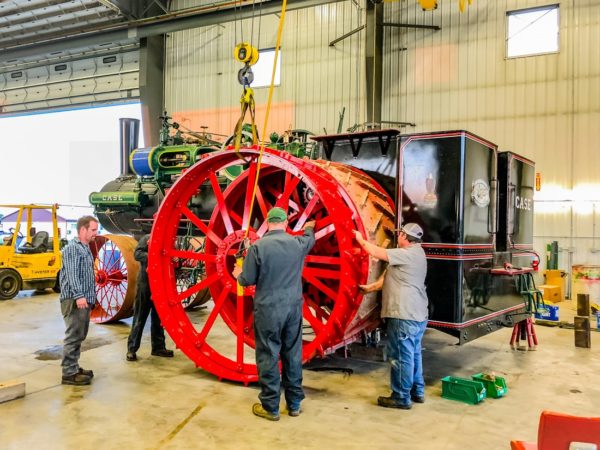 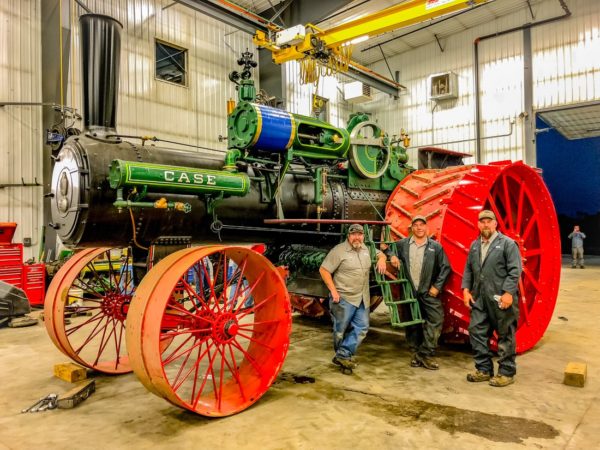 Chad, Tim, and Jeff from RDO after getting the extension rims on

Crowd gathered in anticipation for the 24 bottom plowing 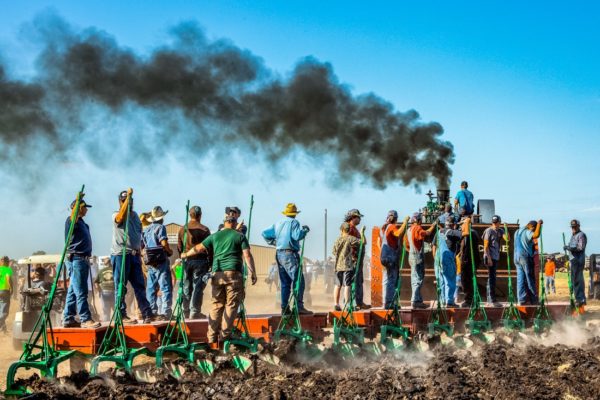 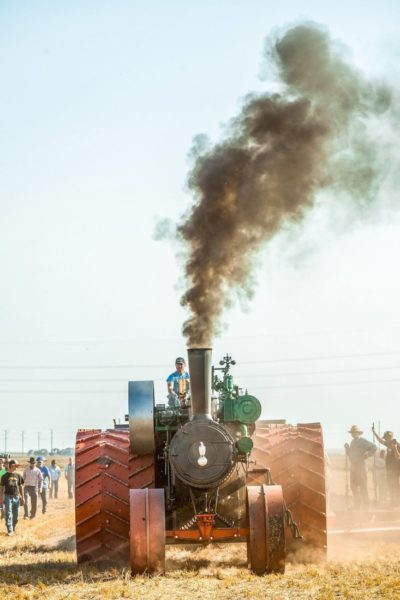 Coming back on the 1st round pulling 24 bottoms 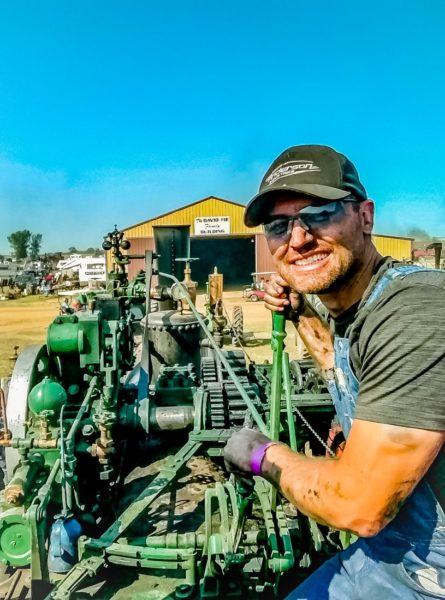